On the night of February 22nd, we poured a mixture of sand and water into the fuel tanks of two tractors used in the construction of a new Atlanta streetcar. The streetcar is one of many major development projects the city has initiated in the past few years as a part of a general plan to revitalize downtown. We know that this plan only means more police and unaffordable housing.

We offer this small gesture of solidarity to the ZAD, the No TAV movement, and the occupation of the Hambach Forest. We would also like to send strength to those affected by increased surveillance or repression the new developments have brought to Atlanta.

Our action was very simple to perform. It did not take long to plan or to enact and we found all of the materials on the side of the road. We do not believe that an accumulation of “actions” makes a revolution, but we wanted to give encouragment to the current and future participants of revolutionary struggles. Onward, strong hearts!

Posted in Action, General, solidarity | Comments Off on Atlanta, GA: Tractors sabotaged for the ZAD, No TAV, Hambach Forest

Call-out for actions and manifestations on the 22 February 2014 ! [EN]

From the ZAD to Val di Susa !
From Hambacher Forst to Taksim Square !
Why not in your place ?

This  is a call-out for actions and manifestations on the 22  February 2014 !

No border ! No Nation ! No Pasaran ! No more BULLSHIT !

From the ZAD to Val Susa !
From Hambacher Forst to Square Taksim ?
From Calais to Lampedusa
Hambourg to Exarchia
From Heathrow to Atenco
From Valogne to Wendland
From Niscemi to Mayo
Monte Belo to Khimki
Fukushima to Tshernobyle
From prison to prison

signatures
A few persons from a ZAD.
And YOU ? (Send us a mail if you want to sign the call-out !)

Here the two strong calls from the NO-TAV Movement and the ZAD-occupation movement against the Airport in Notre dame des Landes :

Saturday, February 22 – National Day of Struggle
The coordination committees of  the NoTav movement, met up Wednesday 8th January 2014 in Villar Focchiardo, attentively assessed the very serious legal situation created by the recent arrests of Chiara, Claudio, Mattia and Niccolò, which has built a wall of juridical charges, developed to simply intimidate all sacrosanct struggles, which, also thanks to NoTav movement, are growing up in the country.

We actually noticed that in the trial record, investigators insisting on strictly legal terms, support a clear political thesis. Based on a brief history of legal acts and international summits which led to the installation of the construction site “Chiomonte” in Val Susa, the judges argue that it’s a democratic development. Whether action against the site – in connection with the listing of opposition practices whose thick file provides a long list – is defined “terrorist” not so much for its specific characteristics, but by the fact that’s opposing to an intergovernmental decision ? All decisions imposed by the state have a legal packaging, which means they are strictly based on the law. Everyone who puts a state project under discussion is liable to “terrorism”. This leaves only the platonic disagreement to be reduced to a movement of opinion ? Giving a specific character to its own “NO”, which at bottom is the essential characteristic of No-Tav movement, becomes undemocratic. Totalitarianism today speaks a different language: “You don’t like our democratic decisions ? You’re a terrorist, I’ll lock you up in jail and throw away the key “.

Let’s recall that from one period to another, the state and “strong powers” frontally attack the enemy on its strengths, not on it’s weak points. It becomes clear that the use of the category of terrorism against the No-Tav movement – for what it expresses and symbolizes – is in this sense a warning to all, for whatever other struggle movement. Thus becomes a terrorist anyone who’s disputing the decisions of the state, and dismantling the social pact designed by the Constituent Assembly.

Following up the logic of prosecutors and Rinaudo Padalino, the “terrorist” nature of the struggle against the Tav does not characterize a so-called “qualitative leap”, but its nature itself: this “NO” of twenty years experience, knowledge, confrontations and actions that are its consistent development. Not to be resigned in front of batons, gas, mechanical shovels, the Lince (economic and commercial expertise in Italy, ndt), incarcerations, the media terrorism, that’s the crime that contains all others.

For these reasons the NoTav Movement announces and proposes a national day of engagement and struggle, FEBRUARY 22, each in their own area, to all components of the fight that resist and fight against the waste of public resources, against the devastation of the territory, the right to housing for decent work, safe and paid fairly. A national day of struggle, area by area in defence of natural and constitutional right to veto government decisions that reflect the interests of powerful lobbies, banks and mafias at the expense of the people. Joint mobilization against the delirious use of laws on the part of prosecutors and the judiciary of Turin in solidarity with imprisoned comrades, with those comrades already condemned, and countless resistant which still face judgement for defending commons, a day of struggle that will follow in mid-March with a meeting point in Rome for the defence and the legitimacy of social struggles.

In preparation for the day of the struggle, we invite to call up for meetings in other areas to raise awareness on these issues as much as on projects that are opposed. In the Susa Valley about the construction of the motorway parking “Susa San Didero”, the area where they want to de-place the road from “Guida Sicura de Susa” à “Avigliana” and the railway line in the area of Borgone. Proposal approved by the coordination committees NoTav Movement. 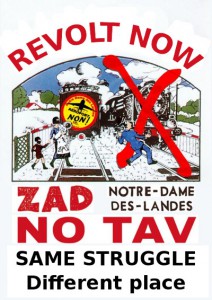 Voices and Call-out from the ZAD to Val Susa :
Resistance and Sabotage !

Destroying and devastating everything to go faster, to control Spaces and individuals, to gain always more money. Developing and making us believe that we can’t oppose it ourselves to those that oppresses us. This is the logic of the societies in which we live. It is the project of the Airport Notre-Dames-des-Landes . It is the one which transforms and bungles entire towns and villages where the poor people untangle. It is also the one of the TGV line ( TAV ) between Turin and Lyon which would have to go through the Val Susa Valley, digging the longest tunnel in Europe ( 57 km ) in the mountains, while crushing the rage of all those who are struggling since 20 years against.

Who fights against the Airport in NddL and the world who brings it with, can also recognize themselves in the No-TAV struggle. States and companies would like to have us docile and resigned. But in Val Susa as on the Zad, many people decided that the projects will not see daylight, and are not limited to passively ask policy-makers or continuing shouting “NO” which has been ignored for years. They act up and are experimenting with a diversity of actions to oppose to despoilment and devastation.

Against the attacks of the state, they are resisting and choose to be in solidarity with each others. When cops and soldiers came to evict and destroy, the Zad was responding massively and our determination has thwarted their intervention.

In Val de Susa, it’s more than two years that the state, its cops and soldiers, built a fortress to “protect” the building site of Maddalena. But the movement continues day and night to cut fences , block machines , to manifest despite the barbed wire, the cameras, batons, tear gas and other repressive offensive. On the night of 13 to 14 May, an anonymous thirty No-Tav activists attacked the construction site of the High-Speed-Train in Val de Susa, by entering inside and burning down materials and equipment. This fast and accurate action had demonstrated, once again, that the fortress of “La Maddalena” is not untouchable and it is possible to stop the operation. Sabotage as part of the struggle, which was supported publicly by the No-Tav movement.

On 9 December 2013, the political police, on the orders of prosecutors of Turin and Milan, jailed four comrades, Chiara, MaTTia, Niccolo and Claudio, for “attack with purpose of terrorism”. They are accused of participation in the action of May. The accusations revolve around Article 270 of the Italian Criminal Code: “causing harm to Italy and the European Union with the objective of forcing legitimate national and European authorities to refrain from engaging and financing on the high-speed-rail-line between Lyon and Turin”. The appearance of these accusations against the No-Tav activists does not come from nowhere. Faced with a movement of struggle that confronts state decisions and reinforces the diversity of actions and the number of individuals who take part, the state is in trouble, so they are playing the card of “terrorist” repression. It is necessary to take into account that this juristic weapon is used by the power against the movement as a whole. The state imposes its decisions “democratically” based on the force of law and legality, legitimacy, making them compelling. Democracy is a like a reinforced door against any form of disagreement, in exception they concede moaning. The disagreement does not stop, the door is reinforced with barbed wire and soldiers. The disagreement is resistance and sabotage, it reveals the “terrorist purposes” of the fight. The power and speaks a clear language: “You dont like our democratic decisions and you act against ? You are a terrorist!”. Movements against the TAV and the Airport gave concreteness to a clear “NO” through years of experience, knowledge, confrontations and actions. It is this determination that becomes Anti-democratic and terrorist, not a specific action: the attack on the site that night. This repressive offensive is the application of a device thought against any social conflict, and can hit any struggle. It is important to respond as massive as possible .

Terrorists are those who vandalize and destroy our lives and the spaces we inhabit. The terrorist is the state. Support for all those comrades detained and charged is not only an act of solidarity, but the determined claim of struggle and its reasons in Val Susa, the Zad and everywhere.

On February 22, a day of solidarity action was called by the Movement NoTav. The event of 22 February 2014 in Nantes against the airport is an opportunity to scream our support towards our comrades and share the same breath of determination : the fight does not stop !
Freedom for Mattia , Chiara , Claudio e Nicco.
Freedom for All
For more information on the NoTav struggle
on the arrests (in Italian)
on the struggle against the Airport

get in touch here

Posted in General | Comments Off on Call-out for actions and manifestations on the 22 February 2014 ! [EN]